Music Minister maestro, Rev. Aba Quainoo who has a vast knowledge and over 20years of experience in making good music, comes off a hiatus with the release of a new sound ‘Exalted One’ featuring super-talented worship minister, Robert Mensah.

The new sound is accompanied by a very beautiful visual which will make your edification more potent.

Exalted One by Rev. Aba Quainoo declares the supremacy of God, His endowed nature, and His superiority over any entity in the universe.  Produced by the prolific Quainoo, Exalted One will capture the heart of any listener, reminiscing about the revelation in Christ will, in turn, bring blessings. Listen and enjoy!!! 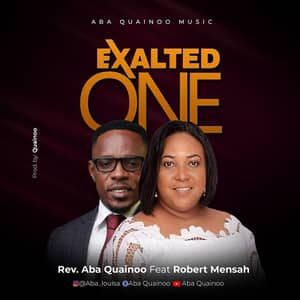 The outreach concert held on the 19th of March 2021 showcased an array of young gifted men of God, delivering words of encouragement through music, lifting the atmosphere into the realms of the heavens, and inspiring hope within the pandemic.

It was a privilege to have witnessed the composer and author of the song perform her song live in church before her congregants along with a new young sensational duo named the Levites. A song that was written 20 years ago was now enjoying massive promotion.

She thanked God for giving her the talent of writing songs and books, and she was also grateful for how Apostle General, Sam Korankye Ankrah believed in her and launched her first album in March 2000, when nobody knew her.

Rev Mrs Rita Korankye Ankrah has also been a great source of encouragement to her, she said.

Wo kronkron ye ye me fe, which was received from the Holy Spirit, during a Tuesday service at Royalhouse Chapel’s old auditorium at Kokomlemle in year 2000, was one of the songs on her second album titled, “Hwe Ewurade” meaning “Look up to God”, launched in November 2001.

Without any musical background, Rev Aba Quainoo has three albums to her credit, and she is trusting God to release more songs very soon.

I give God the glory she said, God had his own plans for the song and 20 years after the composition of the “wo kron kron y3, y3 mi fe and Exalted One” song, it still lives on and reaches further than human intervention could have had.