Geraldine Ngonda the Paris based international gospel recording artist is set to minister at the forthcoming SYNERGY 4.0 event in London in September 2022.

SYNERGY is an annual gospel event organised by Evans Ogboi and it parades some of the biggest gospel artists in the United Kingdom and beyond. 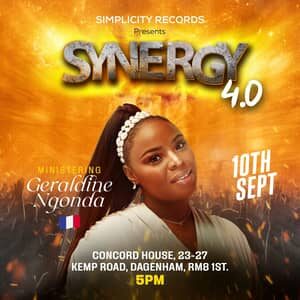 Géraldine Ngonda is a French based Author-composer, and singer. She is of Congolese origin. She is married and her marriage is blessed with two little boys named Gospel and Wisdom. Her passion for singing dates back to her childhood, when she spent time in her room singing for several hours.

According to an anecdote from her mother, her impressive voice abilities at that young age challenged the neighborhood. Her Christian mother for twenty years often asked her to accompany her to church, at that time she had not yet received Jesus Christ personally in her heart but she was very interested in the choir.

In 1997, the choir prepared a seminar to receive Pastor Benny Hinn where she participated and was very touched by this experience. It was one evening in 2002 that she felt the presence of God in her room, and in tears she understood that it was time to give herself totally to the Lord. She followed this path to the church where she grew in the faith and joined the choir. A few years later, she became the leader of the choir until 2011.

This experience availed her the opportunity of collaborating with many French-speaking and English-speaking artists, to organize several concerts where she sang her personal compositions. From 2013 to date, Géraldine Ngonda has released a plethora of powerful songs which are a mix of different musical genres which include gospel, soul, salsa, African rhythms, in several languages including French, English, and Lingala. You will be touched by the depth of the messages God gave her.