While many are used to the grime vibes and afropop sound of Dabo Williams, Alter Boy as some refers to him, once again exhibited his versatility and ambidexterity as he jumped on this new hip hop record titled “Jaga: The Holy Ghost Taliban” featuring the eloquent and punchy Christian Hip hop artiste, Saladeen and rapper, T God DaFlemSpitha.

Jaga which is a word which literally means boss or don, is a single which describes our potency and vigour as believers filled with the third personality of the trinity, The Holy Ghost. With T God’s tongue twisting lyrics and Saladeen’s cavernous and gaping lyrics, Dabo Williams seems to have dropped a major spiritual jam which is capable of chasing demons out in every event it is played.

Jaga is the new single of Dabo Williams who have dropped several singles this year which includes Focus, The Call, Ginger, Viberation EP among many others.

Check it out here. 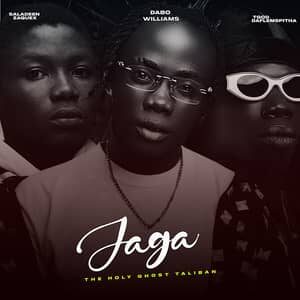