Light Of The World Download and Stream | Tj Dairo

Coming on the back of his well-received Alive Forever single from last year, UK worship leader, songwriter, music producer, and musical director Tunji Dairo a.k.a TJ DAIRO is back in 2022 with his first-ever Christmas single, just in time to celebrate the festive season this year.

Titled ‘LIGHT OF THE WORLD’, the contemporary gospel/funk music offering will be immediately familiar to lovers of gospel music because it embodies the energetic and authentic sound that is associated with the genre.

‘Light Of The World’ sees Tj Dairo start with an account of the birth of Jesus which was foretold and marked by divine visitations and the presence of celestial bodies in the skies. The energetic rhythms in the music, vocal, horn, and string arrangements set the stage for the core message of the season which is “ Rejoice, the savior is born -Jesus, the light of the World”

Speaking about the inspiration behind the new single, Tj Dairo says, “As the Christmas season approaches, it is fair to say that the entire world is still in a state of confusion. Nations and governments are literally punching in the dark trying to solve a plethora of problems that will undoubtedly require some divine intervention. This song is a reminder that God has already provided a solution by sending his son.  Jesus said “I am the light of the world. Whoever follows me will not walk in darkness, but will have the light of life” John 8:12.
The song is energetic, engaging, and full of life whilst keeping in step with its core message which is a clarion call to us to share our faith and also be light in a dark world”

Written, arranged, and produced by Tj Dairo, who is also on keyboards and music programming, Davina Dairo and Anita Dairo rapping, and finally Tj Dairo and Morayo Orekoya on vocals.

Born into one of the most revered musical dynasties in Nigeria, the legendary Dairo family, music has always played an important role in Tj Dairo’s life. He draws his influences from Christian Greats like Panam Percy Paul, CeCe Winans, Don Moen, Fred Hammond, Graham Kendrick, Israel Houghton, Ron Kenoly, and Michael W Smith, with his songs creating musical and lyrical layers to convey his message in a way that doesn’t alienate listeners but lifts their spirits and provides them with a sense of hope that all will be well in the end.

His unique gift and creativity have seen Tj Dairo work and perform with the likes of Blue, II Divo, Simon Webb, Steve Mac, Michelle Williams, Graham Kendrick, Tim Hughes, Samuel Ljungblahd, Noel Robinson, Paul Dairo and Muyiwa Olarewaju among others, while his passionate commitment to Christian music has paved the way for him to serve as music director and consultant for churches across the UK and Europe. He is also an associate pastor in the Redeemed Christian Church (UK) and served as music director for the Festival Of Life in London, one of the biggest Christian festivals in the UK and Europe for 10 years. Recently, he worked with Tim Hughes and appeared on the ‘UK Blessing’ recording which was recorded in 2020. Tj serves on the planning team for the UK Songwriter’s consultation led by Graham Kendrick and Philippa Hannah.

‘Light Of The World’ is out on November 18th, 2022 on all online digital music platforms. 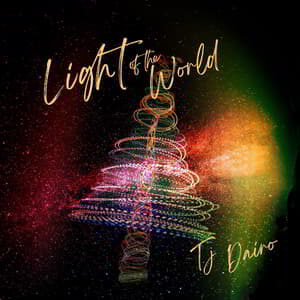 Download and Stream Light Of The World By Tj Dairo (MP3)