Titi Folarin the Maryland US based gospel artist releases yet another fresh kingdom sound titled HALLELUJAH.

ABOUT THE SONG
According to Titi, “The song “Hallelujah” was birthed as I was called upon by my father in the Lord, Issac Oyedepo to minister at a praise night in December 2019. It supernaturally poured out of my heart in celebration of God’s goodness and greatness.”

Hallelujah is a song of thanksgiving and praise!!

The song was originally performed in salsa but this single has an infusion of afrobeat.

I pray that as we all use this song to praise, we will continually have daily loads of God’s blessings evident in our lives. 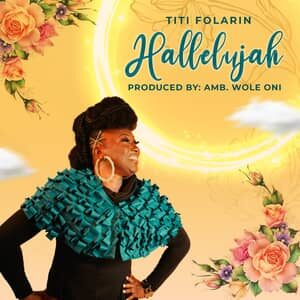 Titi Folarin is a captivating gospel singer and worship pastor based in Maryland. With the love of God and music in her heart, Titi Folarin is on a mission using her voice as a tool to uplift others through the praise of God.

Folarin’s relationship with music started at an early age, and for this, she thanks her biggest mentor, her father. Folarin’s father (Pastor Sunday Sowunmi) was a choirmaster. Folarin remembers her father gathering her family around with the sound of his box guitar, and they would then proceed to fill the whole house with song. Through these cherished moments, Titi Folarin’s passion for music was ignited. As she grew, her father taught Titi how to write songs of her own. She would perform on stage for the first time at age 12.

Folarin went on to release her 2010 debut album Manifest.Within the Manifest album, Folarin compellingly delivers gospel music. In the album, she draws from a variety of musical sounds such as jazz, contemporary gospel, as well as West African musical elements stemming from her Nigerian Yoruba ancestry.

Notably, Titi has performed for various bands and choirs in the last decade. She has also served as worship minister with different churches.

A highlight of her ministry was featuring as lead female vocalist on the Winners Chapel Maryland’s One Voice music release titled TURNING AROUND.

Titi currently serves as a worship pastor in her local church.

She is happily married and fulfilled.