Out Of 100 is a new single from fast rising talented musician Uwaifo Isoken Peter popularly known as Peter De Rock. Peter De rock started his musical career in 2008 while he was still in junior secondary school, he was introduced into music by his music director  Mr Moses Owa also known as (golden boy) in Benin city who graduated from Uwaifo’s music school.

Shortly, Prof. Victor Uwaifo saw Peter’s drive and perseverance and he took personal interest in nurturing his skills in playing the guitar whenever he visited. Peter De Rock is a songwriter, composer, music director, performing artiste who in the short period he has been playing publicly has gained recognition and has also been given an award of Honour for his innovative and creative nature coupled with his show of dexterity in every little thing(gala night 2019). he has released two studio albums titled (weneagbonmu) and (jesu-do) since his entrance in the music scene.

Peter shows versatility in his path by singing indigenous and non indigenous music. quite a gospel lover, he shows his role as a Christian by praising gods name through his record. He also has seven siblings respectively of which he’s the last.

Peter De rock comes from the Uwaifo’s family who hail from Ugwisi town of Oredo local government area and was born in the year 1994 January 28. Peter De Rock’s father late Clement Uwaifo was the immediate elder brother to Prof Victor Uwaifo and was the first musician in the family. unfortunately he was eight(8) years old when his biological father passed on and since then has watched and taken prof. Victor Uwaifo as his father figure and mentor till date. Peter De Rock loves music as he says its part of him. from gospel to highlife music. ministering in churches to  present his gospel songs and performs his highlife music like his mentor in various shows. He plays various musical instruments like the guitar, piano, bass, saxophone, and drums. He gained a certificate in Jehoshaphat music Academy and has his own music band called De Rock Muzik Factory. 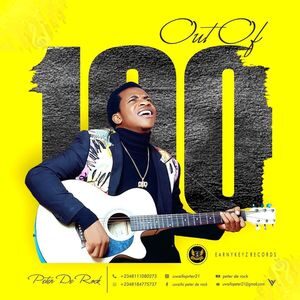