The song is a clarion call to all to cry unto the Lord now in order to avoid crying in eternity later.
“God gave me this song for such a time as this” Mrs Nwachukwu explains, referring to the recent pandemic and civil unrest resulting in the #EndSARS movement.

Mrs Nwachukwu, best known for her collaborations on hit songs like ‘Ekwueme’, ‘You No dey use me play’. Mrs Nwachuku who wrote and composed the Igbo singing part in both songs was also featured in Nara Ekele by her father in the Lord Dr.Pastor Paul Enenche. All three songs are global hits and still trending the social media space, all to the glory of God Almighty.

Mrs Nwachuku released her first single ‘Ikem’ (GOD OF ALL POWER, PSALM 62:11) in July 2020 shortly after the ease of the lockdown. ‘Ikem’ talks about the unimaginable, indescribable and undefeatable power of God. The song which is a mixture of Igbo and English has indeed been touching lives and destinies, and ‘The Cry’ which is set to be released today 22nd November is set to do beyond by the help of The Holy Spirit.

All glory to God.
God bless you all. 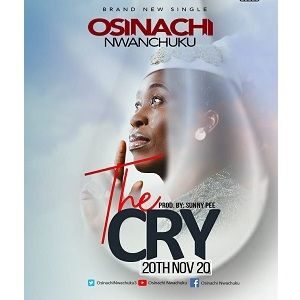 Lyrics for The Cry By Osinachi Nwachukwu

Be conscious of Eternity
Don’t live Your life anyhow
Heaven is real, hell is real
Come to Jesus Today