Kingzkid – Not for the Clout

Ahead of the release of his 3rd album dubbed “BREAKTHROUGH”, the King of new school gospel “Kingzkid” is back again with what seems to be the first of its kind in gospel music.

He goes hard on this urban instrumentation with an incredible vibe featuring Regardless.

The original duo that dropped the world acclaimed and timeless hip-hop song “I got my Jesus On” is back at it again, but 10 TIMES HARDER this time with “ Not for the Clout ”.

Kingzkid is scheduled to release his third album, the “BREAKTHROUGH ALBUM” October’s this year

“Not for the Clout” which is Kingzkid’s 4th release for the year was produced by Willopack.

Kingzkid is a Ghanaian gospel recording artist and songwriter. He is the first African Gospel Musician to win the Gospel Academy Awards Best International Act 2019 award.
Kingzkid released his first album “Vindicated” in 2011 and “Metamorphosis” in 2014. He is the President of Gifted Music Records and Founder of “Amplified” a youth movement that also hosts an annual concert dubbed Amplified Concert which aims at winning souls for Christ.
He has collaborated and performed with numerous gospel musicians, including Mali Music, Tim Godfrey, Ohemaa Mercy, Joe Mettle, MOG Music, Micah Stampley, Sinach, Denzel Prempeh, Nii Okai.
His third album “Breakthrough” is scheduled to be released in October  2021. 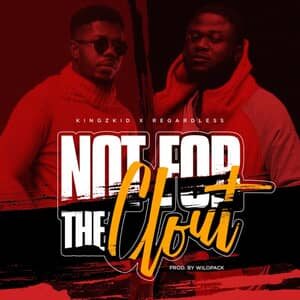 Download and Stream Not for the Clout By Kingzkid (MP3)