The 7-track album was preceded by the first single off the project; Highly Lifted and it delivers on the promises of the single. The album which features the sonorous vocals of Favour Alugha, beautiful harmonies and super production is a listeners delight.

From the album’s opener Good Enough which features Anny Guitar, a simple call and response tune that draws its sweetness from the simplicity of its production, lyrics and delivery the album shows there is in fact beauty in simplicity.

The second single I Bu Chim (which means You Are My God in Igbo) is another soulful soft rock tune which is one of the album’s stands out tracks. I Bu Chim is a beautiful tune which also draws its strength from the simplicity of the song’s lyrics, delivery, harmonies and production.

My Attention is the album’s third track and follows the same formula of the previous two which is shows Favour working heavily with a backup choir. The song is another impressive tune. Gospel singer Just Rolland is featured on the song.

Track 4, I am Free takes things up a notch. The upbeat tune steps away from the mellow soulful tunes of the first trio but still has the songstress working with her choir.

I Am That I Am takes us back to the soulful mellow simple Favour Alugha and is her zone which the sweet production garnished with strings and simple piano strokes. The song features another Gospel music songstress Ruth Chuks.

You Are God is a worshipper’s delight as Favour pours her out in worship in this tune.

Highly Lifted which served as the first single off the album set the tune for the album’s expectations and it draws the curtain of these beautiful pieces which served as a worthy introduction to Favour Alugha.

Overall Glorified is a beautiful body of work and we look forward to future projects from the Gospel music minister Favour Alugha.

The project is available on all streaming platforms. 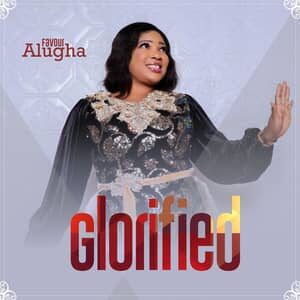