The title of the single “Baba Esé,” is coined from the Yoruba language which literally means thank you, Father.

It is a heartfelt adoration tune to God, in appreciation of his goodness and endless mercy bestowed on us.

“Having considered the unpleasant happenings beclouding the world as a global village, yet God never stop giving us divine protection as a people, proving his banner over us and unfathomable mercy” – Orindoyin shares. 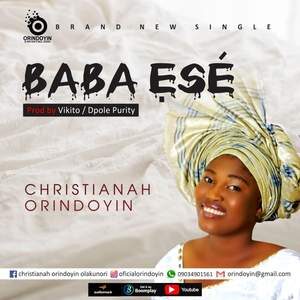 She was born in Ibadan to the family of Pastor & Mrs  Olalekan Olaniran Olakunori.

Music runs in the family and can be likened to being the family profession as her parents were musicians and owned a choral group called Pasolak Voices back then.

In Pasolak voices as a group, Orindoyin learned the rudiments of music, composition, and performance under their tutilage.

At her tender age, Orindoyin would go along with her parents to church ministrations and social outings, as at the age of 10 she had become a backup singer.

She started taking the role of a lead singer at the junior choirs of her church ( Christ the Livingstone apostolic bible church) and later graduated to the senior choir.

Orindoyin has attended many musical concerts as a vocalist with her church choristers back then.

In the year 2010, Orindoyin began her music career professionally at pastor Rotimi Alabi and Funmilayo’s wedding ceremony, everyone present at the event was amused by her astonishing performance that day. Thus prompted her into creating her own band ( God’s will voice) that same year.

Currently, Orindoyin is the convener of the annual concert loud in the city of Ibadan tagged Appreciating His Mercy Mega Praise Concert.

Outside the world of Gospel music, Christianah Orindoyin is a seasoned voiceover artist who has done many signatures tunes, jingles & advert for Tv & radio stations..

She dropped her first album titled ANCIENT OF DAYS in 2015 and she dropped her second album ( HIS GREATNESS)  in 2018 which is still trending fast !!.

Christianah Orindoyin has much more to offer. You all should look forward to

seeing more from her.